If the Knicks Strike Out with Durant and Kyrie...What happens next? 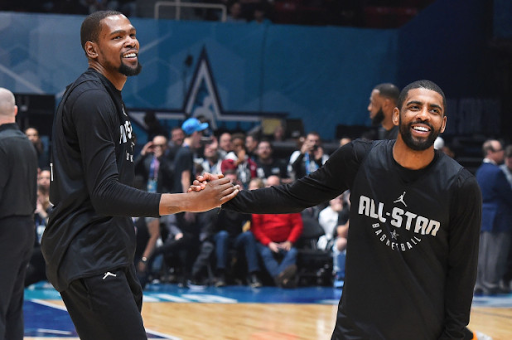 So it turns out that when you have an 86% chance at not landing the 1st overall pick, that means you are most likely not going to land the 1st overall pick. Now that we got that out of the way, let's discuss the Knicks' upcoming offseason, specifically free agency.

I have to entertain the possibility that Durant and Kyrie are going to join the Knicks because the Knicks have the cap room to afford both superstars, and because they said words to each other at an all-star game.

Crazy scenario: Kyrie and Durant don't sign with a team that has had the worst NBA record while spending the most money in luxury tax since 2001. What is the next best course of action?

Who are the other free agents this July?

Kawhi Leonard: Obviously if you can Sign Kawhi Leonard, you do it. Odds are he would not leave a Raptors team heading to the Conference Finals for the Knicks. Some people are speculating that if The Claw is leaving, he's going to LA.

Kemba Walker: This New York Native is destined to join the Mecca, right? It's perfect, they can play that "I'm coming home" song like they did with Melo!

Issue with Kemba and everyone else below on this list is that he will command max money with no supporting cast around him. If he can't even make the playoffs with a better Hornets team, who's to say he will lead the Knicks super inexperienced roster to the playoffs or even close to title contention?

The players above will all command a max contract in the free agency market (except for Boogie possibly due to his injury history). The Knicks would benefit from signing any of the above players, but their contract would cripple the Knicks' ability to make moves in the future. Solidifying their future as a first round exit team.

The last time the Knicks cleared cap space it was to sign LeBron James. They ended up with Amar'e Stoudemire. We all remember how that turned out.

Option 2: Sign veterans to 1 year deals and build for the future

It is very difficult to orchestrate shortcuts in the NBA, unless you are very good at colluding without getting caught. If the Knicks filled out their roster signing veterans like DeAndre Jordan to 1-year-deals it would put the Knicks in a scenario where they can allow their young core to develop.

Once the Knicks young core develops into a playoff threat, a team that can make an 8 seed. Their young core combined with cap flexibility would be a great free agency destination.

For all the wrong the Knicks have done in the past couple of years, they have all of their draft picks. Thanks to Philly's "process" the lottery odds don't favor teams that tank as much, but that doesn't mean the Knicks can't succeed by having a flexible roster while developing a young core.

“Jim has given us the room to be patient, which is not something that’s been common in this organization. Patient hasn’t been one of our biggest attributes here. He’s given us the room to be patient to develop players, develop a culture within the organization. All we can ask is for fans to look at the plan we laid out last year and we are going to be consistent with [it]. Judge us on that.” Steve Mills 4/13/18

Knicks' management  have already flaunted the youth movement. They claim patience is their focus. If they strike out with Kyrie and Durant, let's see if they're true to their word.
Knicks