Showing posts from January, 2019
Show all

Will the Knicks continue their rebuild this offseason or will they revert back to their WIN NOW nature? 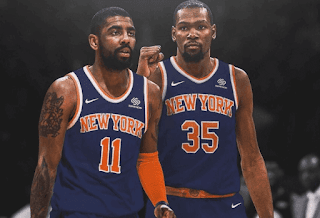 The Knicks are facing a very interesting time in their franchise. Management has catered toward a youth movement. We are seeing deep rotations and many hard fought, but inevitable, losses. A big narrative within the Knicks Twitter community is, "Tank for Zion!" The Knicks are doing the right thing this time around. They're focusing on giving their younger players some much needed experience, while piling on losses at the same time. This is what a tank is supposed to look like. There have also been some rumors involving the Knicks trying to use Kanter's contract as a salary dump to score some draft picks. I can't think of many teams that would want to do that, but worst case scenario, the Knicks will keep Kanter's expiring deal which will help the Knicks gain some much needed cap room. Another major question this upcoming trade deadline is where Tim Hardaway Jr. will end up. He still has two more years on his 4-year, $71 million deal. Even with Kanter's con
Read more
More posts