Over the past two decades, the Knicks have been the most disappointing team in the NBA. Season after season, management has given fans a false sense of hope by overpaying aging stars and trading away precious draft picks, mortgaging their future in exchange for mediocrity. I have told my family and friends that I am actually excited for this season, "Don't get me wrong, the Knicks are going to be at the bottom of the standings, but the future is bright. They have a lot of young talent that they're going to develop. The Knicks should be good in a couple of years."
I am sure you have heard that before. Let's go over how the Knicks handled this offseason, what to expect this season, and what to expect in the future.
Free Agency: Less is More

Hoping the CP3 to Knicks rumors are simply rumors. I love CP3 and am so happy he proved so many haters wrong this season. He’s an all-time great. However, he does not fit the Knicks’ timetable and is not worth giving up young assets (no matter how you feel about those assets) pic.twitter.com/BySQktkdmJ

The Knicks were rumored to trade for Chris Paul and Russell Westbrook. They were also rumored to sign Gordon Hayward. Any of the above statements would have been a classic Knicks move. The above players are proven stars who would without a doubt make the Knicks a better team in the short term. The issue is the Knicks' supporting cast is way too young to support any kind of star right now. There is no reason to get rid of assets when the best case scenario is a first round and out season. Leon Rose and Scott Perry seem to be building for the long term.
I know this offseason was boring for the Knicks, but it was a blessing in disguise. The Knicks have all of their draft picks, picks from other teams and some of the best cap flexibility in the league. Let's focus on the young guys instead of talking about what star the Knicks should sign or trade for. When the Knicks' young core can contend for an 8 seed is when we're allowed to talk superstar acquisitions.
Ain't no stoppin' Obadiah Toppin

When you find out you have to play 40+ minutes under Thibs pic.twitter.com/BW2LW4D7RU

Okay, I admit it, I was not excited about the Obi Toppin pick initially. With the Knicks' giant hole at point guard, I was hoping for Tyrese Haliburton to get drafted. Haliburton's skillset seemed to be exactly what the Knicks needed, and he was a top 8 pick in every mock draft. He fell to Sacramento with the 12th pick as the Knicks passed on him and chose Obi Toppin.
Toppin is an old rookie. The man is older than Frank Ntilikina, the longest tenured Knickerbocker going into his fourth season. In a very underwhelming draft class, the Knicks picked a high floor player; I can't necessarily be mad at that. In limited preseason action, I noticed Toppin has Amare-esque tendencies... for better and for worse. He even wears the dude's number!
Toppin is an athletic power forward who is explosive, lives above the rim, and can extend his range. It's clear he's a NBA ready rookie and will get plenty of playing time. He's a physical guy and does not shy away from contact. Unfortunately, his defense was abysmal in college and in preseason I have seen nothing to impress me.

Immanuel Quickley becoming my favorite Knickerbocker
The Knicks didn't draft the point guard I wanted. Instead, they got point guard Immanuel Quickley. Quickley is arguably the best shooter in the draft, shooting 43% from three in college. Although listed at point guard, I think of him more as a combo guard, like Jamal Crawford or Lou Williams. I think his fate is to be a secondary playmaker who can extend the floor and make plays for others. I can't remember the last Knick who has a reliable floater, let me know on twitter.

He is hands down the biggest fan favorite after preseason. In his first start Quickley registered 22 points (7-12 FG, 3-5 3Pt, 5-7 FT), five assists and five steals. Although this was against the Cavs' B-Team, it's intriguing.
Quickley is listed at 6'3" which is undersized if he plays shooting guard. I don't mind this though, because he has a 6'8" wingspan, which is long enough to guard multiple positions. Quickley has the tools to be a legitimate 3&D threat. I don't want to hype a guy up too much after four meaningless preseason games, but I'm intrigued.
TRADE RANDLE!

I’m getting multiple messages and DMs... “GET RID OF RANDLE”. I hear ya, and I agree. Here’s the good news, he only has $4 million guaranteed next season, meaning the Knicks can waive him after this season and owe more money to Joakim Noah (I know the Noah part isn’t good news)

I want to blame Randle for a lot of the problems last season, but he's clearly a good player.

If you saw his season on the Pelicans prior to the Knicks acquisition, you would know he is a legit player. Randle had the same volume on the Pelicans and Knicks. The difference is he shot 52% from the floor on the Pelicans versus shooting 46% for the Knicks. That drop in efficiency was an extension of how he was used on the floor for New York. If he plays well, he'll be traded for a pick come the trade deadline, just like Marcus Morris (also predicted on Swiss Cheese D)

Closing Statement
Management needs to stick to the plan of developing the youth, while flipping veterans like Julius Randle for assets.
Coach Thibodeau is going to have perhaps the least amount of talent he has ever coached at his disposal, so patience is key. 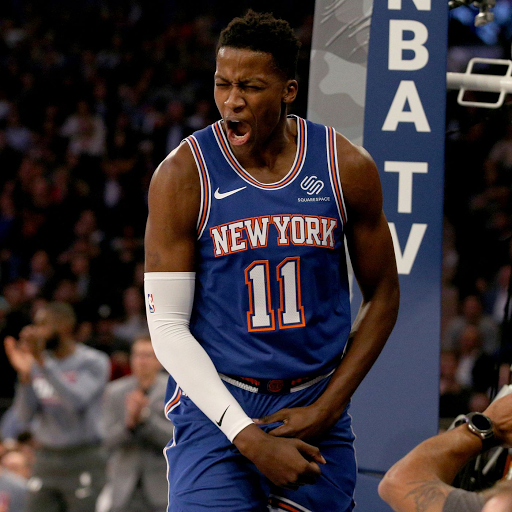 Many blogs will tell you that this is the deciding season for guys like RJ Barrett, Kevin Knox and Frank Ntilikina, "If they aren't good this year, it's over for them. Do or die!"
Those blogs are wrong, it really doesn't matter. The Knicks don't have another option. Sit back and enjoy the ride.
Knicks